THE HEAVYWEIGHT OF THE RESERVE

It is strongly recommended to book
your safaris or your stay in advance.

Is the reservation mandatory?

It is strongly recommended to book your safaris or stay in advance.

How to get to La Réserve easily?

Here is all the useful information to be able to go to La Réserve des Monts d’Azur:

We can be reached at the following telephone numbers:

For your safety but also for health reasons, pets are not allowed.

Can we picnic at La Réserve?

No, our restaurant will be delighted to welcome you for lunch and dinner.

If there is one thing  the European Bison (Bison bonasus) hates, it is to be confused with its American cousin (Bison bison). It is now ten or fifteen thousand years since they have been a continent apart since the last great ice age. From this common past, they keep a similar look even if several features can distinguish them without making a mistake. The Bison of Europe stand upright, their hump is less pronounced. The horns are also less distant because they frequent the forest unlike their relatives across the Atlantic who only enjoy the plains. Weight wise, the two cousins are similar with a small advantage to the American who is built more round. The European male weighs about 800 kilos (1764 pounds) (900 kilograms (1984 pounds) for the largest male of the European Bison of the Reserve) with a height of 1.80 m (5.90feet); while the female weighs only  600 kilos (1 323 pounds).

This makes bison bonasus the largest land mammal in Europe.

The male bison bonasus is not sexist: it leaves the family herd of about fifty head under the shared leadership of adult females. He is content with exercising his “droit du seigneur” at the end of the summer or the beginning of autumn. Unhelpful, he abandons the group when, births start to occur nine months later. The future mother then isolates herself to bring to life a calf immediately on its feet. Ready to flee the wolf!

The family circle is very well organized and perfectly supportive. Thus, when a female calves, she surrounds herself with one or more female bison who walk with  her to the most tranquil places in the Reserve. Since 2010, real nurseries are organized. The births appear to be synchronous and the young are born in a very short time.

For 1 to 3 weeks, mothers disappear in the heights where newborns receive their first lesson, usually under the supervision of a single mother, the nanny. Meanwhile, the other females go about their own business! 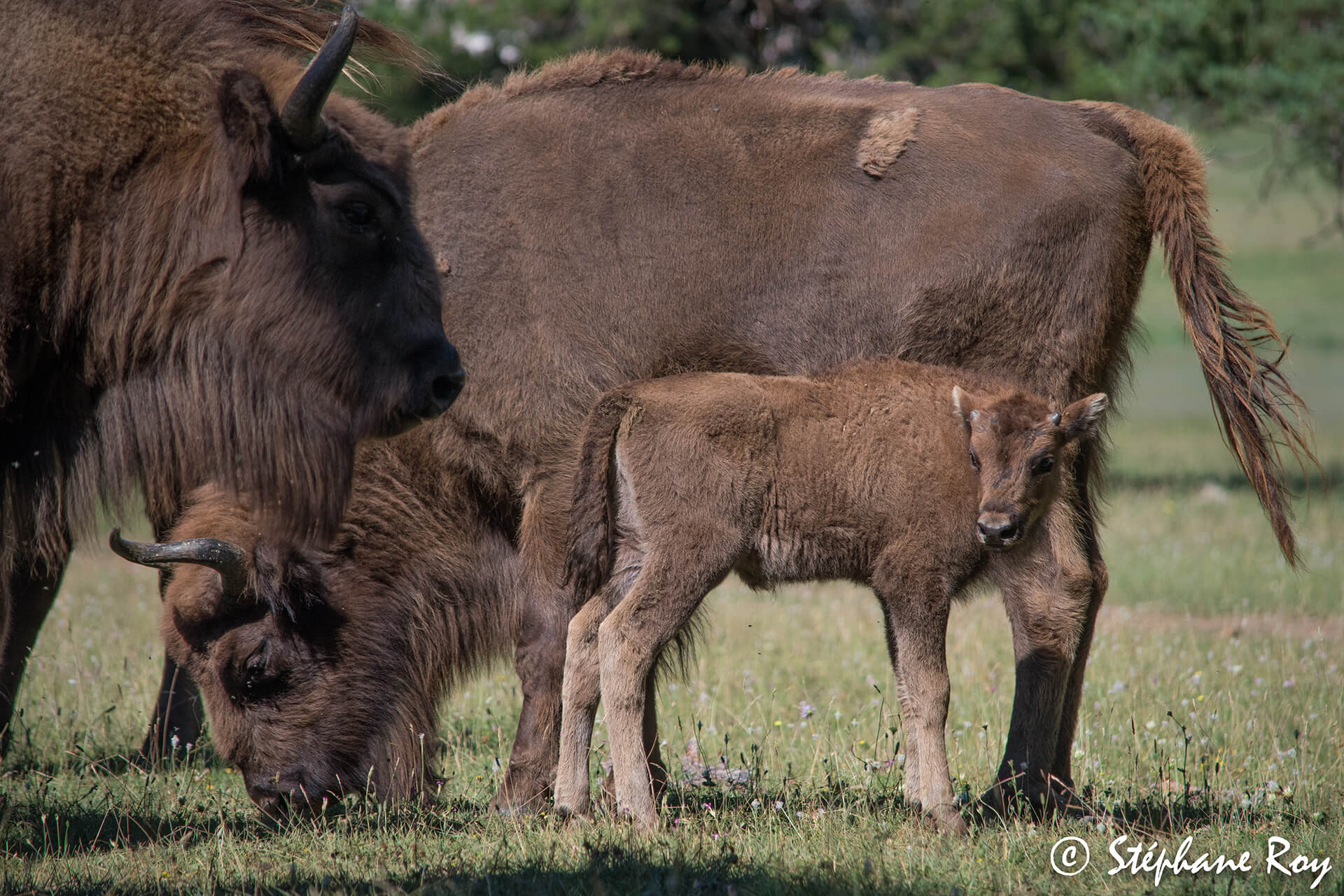 The European bison is a gourmet. He likes to add to  his usual menu of herbs some barks, leaves and shrubs that he finds in abundance in the forest.

the ancestral domain of bison in Europe

A thousand years ago, Europe’s Bison herds roamed the entire continent to the Caucasus. Not only hunting, but also the clearing and development of agricultural activities, resulted in the extinction of the humpback.

It disappeared from France between the 8th and the 10th century, from Switzerland in the 11th century, from Germany and Romania in the 17th century. By the end of the 9th century, only two wild populations survived. One, in the forest of Bialowieza, straddling the Polish-Belarusian border, made up of European Bison, “plain” bison (Bison bonasus bonasus).

The other, in the Western Caucasus, composed of European Bison, “mountain” bison (Bison bonasus caucasius). The first subspecies disappeared from nature in 1919, while the second survived eight years before disappearing also !

Therefore the survival of the species was assured only by 54 animals (29 males and 25 females) held in captivity to establish pedigree, namely not having American blood, and therefore genes.

The rebirthThe reintegration of bison in Europe

Of the 54 surviving animals of the 1920’s, only 13 managed to reproduce, constituting the genetic base of all current European bison, from the plain and the mountain.

More precisely, the Bison of Europe of lowland (Bialowieza) which includes the animals of the Reservation of the Monts d’Azur, descend from 7 individuals (4 males and 3 females) among these 13. In 1923, passionate people  found the Society International for the protection of bonasus bison.

Over the years, the population of European Bison expanded in  zoos. So much so, that from 1952, Poles began to release animals in the Bialowieza forest of Poland. Further reintroductions followed, in Poland, Ukraine, Belarus, Russia, and Lithuania. Today, the bison population in freedom includes 1,800 individuals. It is therefore more numerous than the captive ones which equals 1400 individuals.

In 1996, a European bison program was initiated in Poland. This program imposes strict regulation to prevent cross-breeding between zoos.

to insure the survival of bison in Europe

The European bison herd of the Monts d’Azur Reserve includes about fifty animals of which three-quarters were born on the Reserve. In 2005 and 2006, we went to Poland to pick up our animals where they were  carefully selected by Wanda Olech, coordinator of the European Bison Breeding Program.

The objective of our reserve is to create a population independent of those already existing in Poland and Belarus to increase the genetic variability of the species which is absolutely necessary to ensure its survival. Ideally,we would need  2500 bison in five separate herds.

As our females imported from Poland in 2005 were barely over a year old, it was not until 2008 that we witnessed the first births. There were exactly 9 births ,for 11 three-year-old females, spread from late April to late June. A remarkable result.

To our great satisfaction, the European bison on the reserve quickly adapted to their new territories. During the first two years, they showed a clear predilection for the forest areas they deeply transformed.

Indeed, these brave animals favor the dissemination of seeds by transporting them on their coat and in their dung. In addition, these bristled bulldozers break the low branches and shrubs, and tear the bark of trees to the point of killing some.

They create gaps and even clearings in the forest, which promotes biodiversity. By penetrating again to the ground, the light allows the prosperity of many sun-loving species.

Thus in areas of our reserve where there were fewer than ten plant species, there are now more than thirty.

The clearings created by our bison also benefit other animal species. The red deer, the deer or the hare need these gaps for their biological balance. In turn, these animals stimulate plant biodiversity. On the Reservation of the Monts d’Azur, we note a renewed vigor of Scots pine and a sharp decline in the mortality rate of trees.

In less than three years after its arrival on the Reserve, the European bison has not only adapted perfectly to its new environment but has already significantly improved plant biodiversity.

The return of the lord of the forest, the European bison, is today a brilliant success. 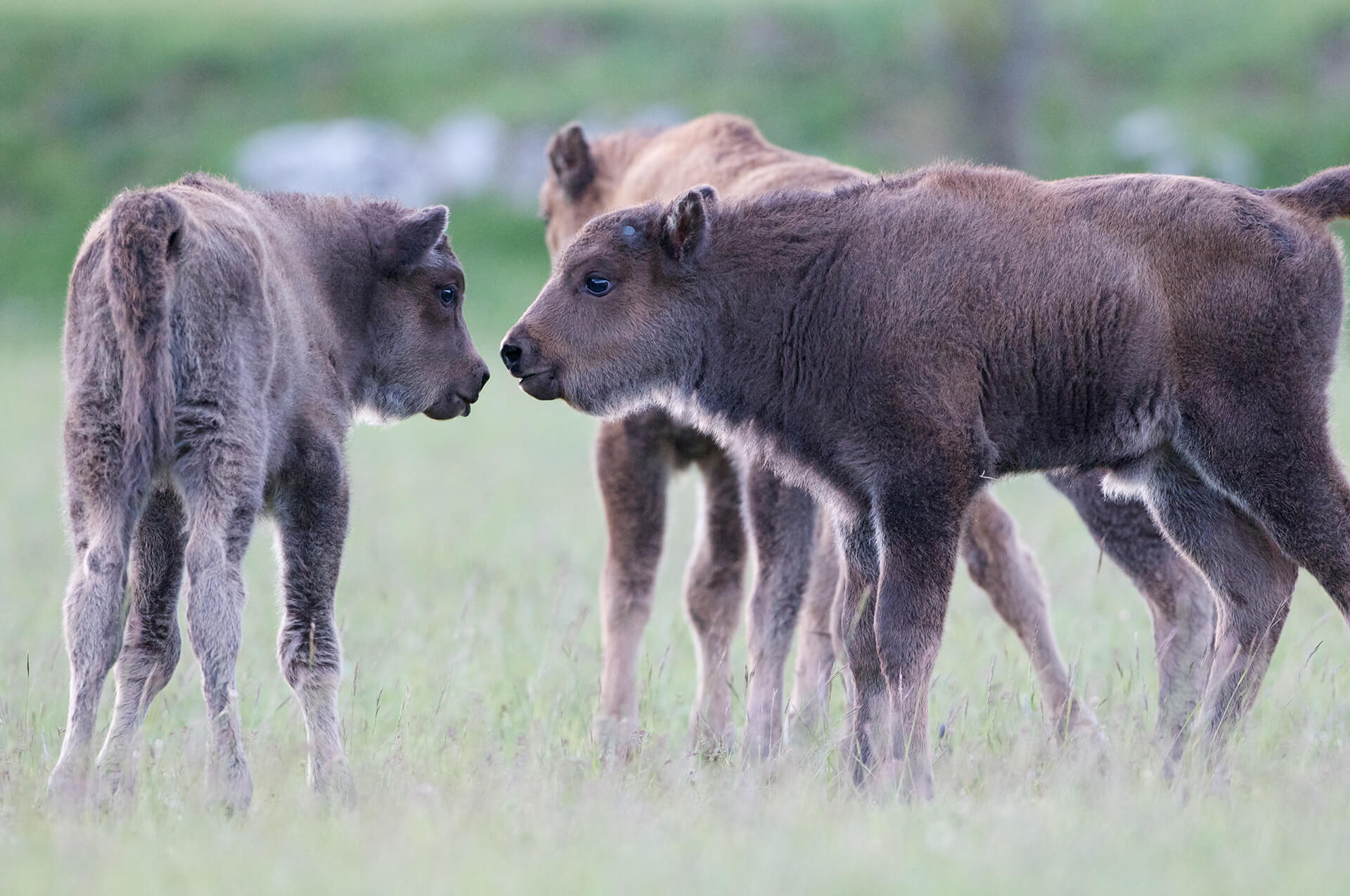 The Wild Encounters of The Reserve

Births have begun. Don’t miss the moving spectacle of newborns’ antics in the green plains !

From Wednesday to Sunday (Sunday night included), treat yourself to a guided safari or a stay !

Take care of yourself. See you soon