the other wonders
of the reserve

Modern species, this small deer is very discreet . Its small size facilitates access to all territories. Forest animal, it tends, from about twenty years ago , to occupy open environments where man tolerates his presence as the “damage” is limited. It rarely reaches 30 kg (66 pounds)  and seldom exceeds 6 or 7 years old.

This discreet animal lives in small numbers on the Reserve, mainly in the bushy areas rich in brambles that the red deer abandons. Indeed, these deer do not appreciate the presence of red deer and unfortunately refuse to share the same pastures

Wrongly described as a solitary animal, it is actually gregarious most of the year. Winter groups can count up to 50 individuals, especially in the cereal growing plains.

The rut takes place in the heart of summer. The roe buck, whose territory includes that of several female deer, actively walks its fief and marks shrubs or young trees by rubbing against it.

When he meets a receptive female, he begins with her a circular ballet that ends, usually, by a coupling.

Gestation is done in two stages, the embryo does not implant in the uterus until 4 months after fertilization! The young are born in May or June.

In autumn, males form small groups. They moult in October, their coat turning from red to gray brown, lose their antlers in November and wear their velvet until February.

During the winter, mixed groups are formed, more or less important, often visible in the stubble or plowed fields.

From February, the males begin to mark their territory. These markings will intensify with the approach of the rut, and the brocades stays alone until the summer. Females give birth at the end of April, or beginning of May; usually two fawn weighing 1 to 2 kg (around 2 to 4 pounds) each. The fawns, which would be very quickly able to move, remain hidden in the vegetation. The mother spends little time with them, only joining them for feeding. She cleans them carefully, going as far as to consume the droppings ,all these steps to escape predators !

By the third week, the fawns will follow the mother and will not leave her until 10 to 11 months later.

The chamois is a small mountain ungulate, with a height of 80 cm (31 inches) on average for a weigh t ranging from 30 kg (66 pounds) for females to 45 kg (99 pounds) for males. In the Reserve, herds are observable from November to the end of spring, mainly on the southern slope of the Montagne de Bleine. Herds have 20 to 50 individuals. Since 2007, some have also colonized the southern parts located above the Gorges du Loup.

Both sexes have horns, thin and curved at the ends. In winter, the coat is rather black. It turns red in the summer. The head and throat are whitish, a black band adorning the face on each side.

The chamois is a ruminant. It feeds on herbaceous plants but also, in winter, lichen, bark or woody shrubs such as broom or boxwood. He likes the steep wooded areas but gains the foot of the southern slopes when the snow covers the heights.

The chamois rut begins at the end of October and continues until the beginning of December. The males then join the females and engage in “jousting”, most often visual. Each opponent seeking to impress the other by a set of threatening postures!

After having dismissed his rivals, one of the males gathers the females on a restricted territory which he watches from a high point. When a female seems receptive to him, he approaches her, head up peeking anterior. She seems at first paralyzed and stops. Often, to better get away at the last moment!

Females give birth in May or June, a young, rarely two. The kids, weighing 2.5 kg (5.5 pounds), are able, one week after their birth, to follow their mother, even on steep terrain. They will live with the herd, at least until the age of 1 year. At this age, they will put on a red coat and will be named Eterle for young females and Eterlou for young males.

The horns that started to grow from birth will quickly form the terminal hook. The shaft will lengthen over the years to reach, at adulthood, about fifteen centimeters (5.9 inches)

The population settled on the Col de Bleine has unfortunately considerably reduced since 2010. Probably under the effect of excessive hunting pressure that forced us, in 2014, to create zones of tranquility to encourage the return of this beautiful animal.

It is a dark brown animal, some subjects have red or grayish reflections. The hairs, called silks, are rather coarse, black with red tips. They measure, on average, more than 10 cm (4 inches)during winter.

The wild boar is characterized by its long snout and its defenses, which are continuous growth canines. An essential tool for digging, the snout seems to be longer in the mountain boar, probably because the lack of fruit forces the animal to dig the ground to find his food. 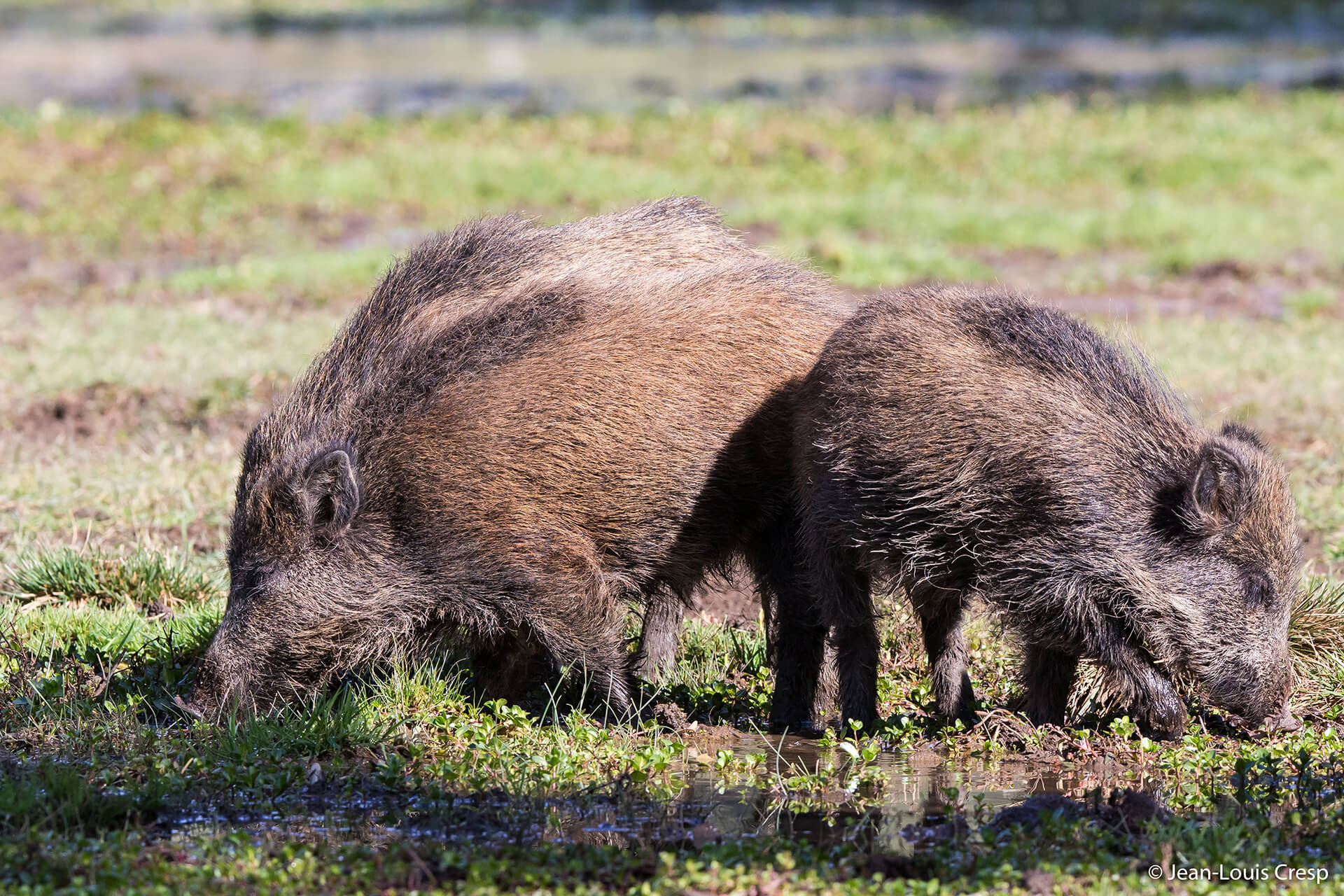 This practice makes him the animal unloved by  farmers! Yet, in nature, the boar is the chief gardener. Turning the soil over, it aerates and loosens it, and helps germinate many seeds.

The boar, with the exception of the adult males, forms groups called sounder, composed of females and young wild boars with a  striped coat which are few weeks old or animal with a reddish coat which are more than six months old.

The rut is from November to January,births arrived  in late winter (February-March) after a pregnancy of 17 weeks. The young are born in a “nest”, called cauldron, that the mother carefully made from stubble harvested around.