THE WILD CHARACTER OF THE RESERVE

It is strongly recommended to book
your safaris or your stay in advance.

Is the reservation mandatory?

It is strongly recommended to book your safaris or stay in advance.

How to get to La Réserve easily?

Here is all the useful information to be able to go to La Réserve des Monts d’Azur:

We can be reached at the following telephone numbers:

For your safety but also for health reasons, pets are not allowed.

Can we picnic at La Réserve?

No, our restaurant will be delighted to welcome you for lunch and dinner.

This wild horse is characterized by a short and rigid mane that moults every year. It coat is always soft with often darker bracelets around the legs. A dark mullet line systematically emphasizes its spine. The belly of this prehistoric horse is white.

These small wild horses weighing around 300 kilos (661 pounds) are extremely resistant: from the steppe and semi deserts, they are content with a frugal diet and know how to withstand extreme temperatures.

Little coquetry on the part of this wild horse, familiarly called Mongolian horse, it has two additional chromosomes compared to the domestic horse  (66 against 64)  does not prevent it from being genetically very similar.

As a result, Przewalski horses and domestic Mongolian horses are interbreeding, producing fertile foals. Different species or same species? The controversy is raging and promises to last even if very recent research (Ludovic Orlando – CNRS Toulouse April 2018) seem to indicate a different origin than imagined so far. 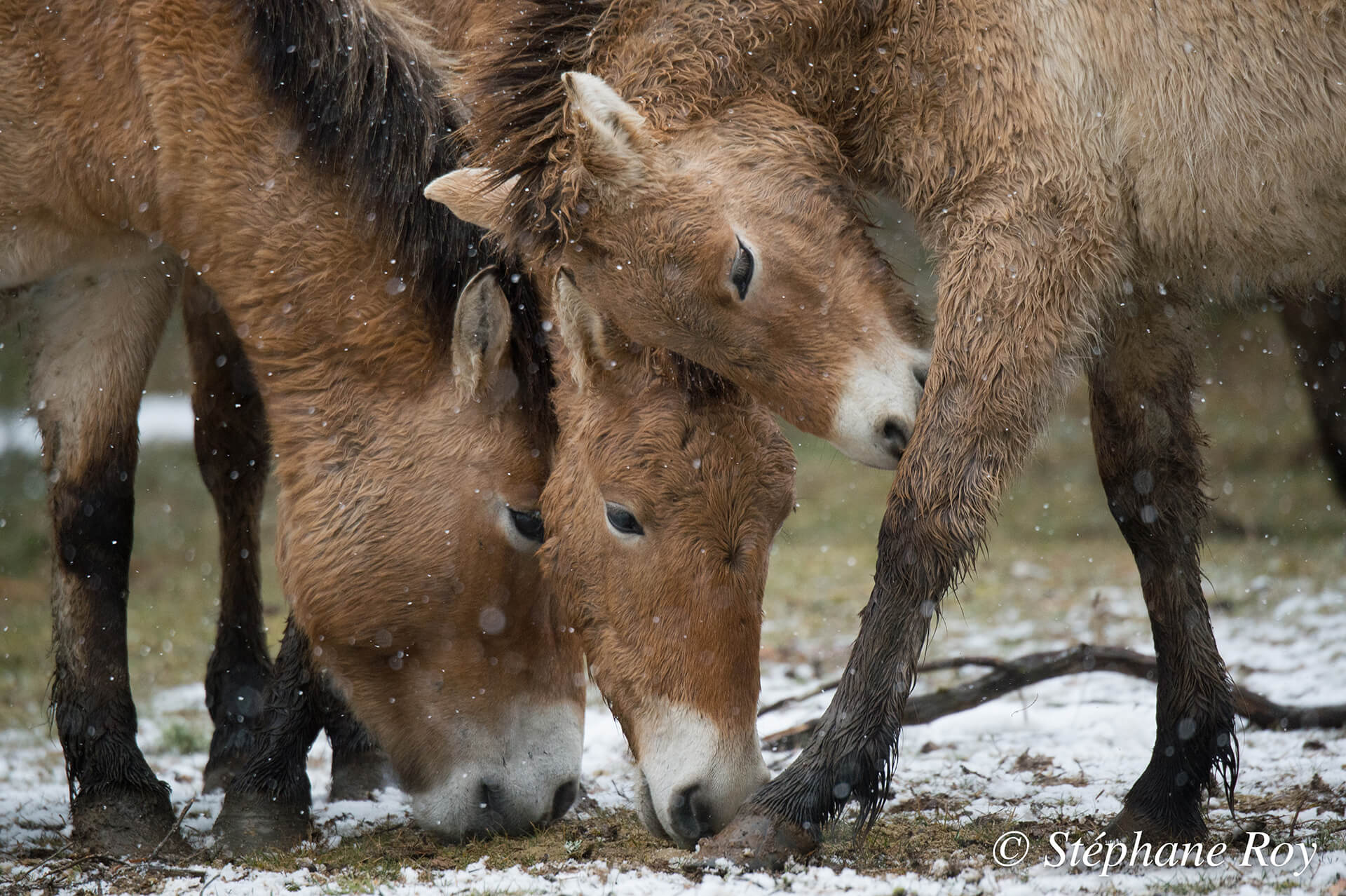 The kingdom of the przewalski horsea species ignored

In the past, Przewalski’s Horse ruled all of Europe and much of Asia. Prehistoric men left 610 representations of wild horses in the decorated caves of France, Italy and Spain. The oldest are 30,000 years old, and the most recent 9,000 years old.

With modern times, it is becoming increasingly rare to the point that the great Linnaeus ignores him in his encyclopedia of species.

Yet until the end of the 18th century, herds of wild horses were still reported in a vast area between Germany and northern China. But, very quickly, the species began an unavoidable decline.

In Europe, the last prehistoric horse was probably killed in 1814, in eastern Germany. In Asia, the extinction of the Mongolian horse was slower. There were still a few rare herds of wild horses in Mongolia and Xinjian at the beginning of the 20th century.

In 1878, at the Sino-Russian frontier post of Zaisan, Colonel Nikolay Mikhailovich Przewalski, a great Russian explorer, received from the local authorities a gift: a skull and a horse skin. He had them brought to the Zoological Museum of the St. Petersburg Academy of Sciences.

After studying them, the curator concluded that they were of  a wild horse which received the scientific name “Equus przewalski Poliakov 1881”. It was then that Westerners discovered Przewalski’s Horse.

a disappearance in the wildvictim of its success

The news of the existence of this Przewalski horse having spread to Western Europe, many zoos or private parks wanted to acquire them. From 1897, several capture campaigns were organized. The most successful, was that of 1901,which resulted in the capture of 52 foals after which the adults, too fast and too suspicious, were slaughtered. Only 28 of these foals arrived alive in Europe.

These campaigns were a disaster for the species and ultimately provided only 11 individual animals capable of breeding. They were joined, with a Mongolian female pony in 1906 and a wild captured mare in 1947, the origin of the current population of wild horses.

The last wild Przewalski Horse was observed in 1968 in the Gobi Desert, Mongolia

For several decades, the descendants of these 13 wild horses languished in zoos and parks, having lost all their wild culture. Today, their number is around 1500. Three associations were created, about twenty years ago, to try to reintroduce this prehistoric horse in Mongolia.

The International  NGO  Takhi Group released 90 horses between 1992 and 2004 after a reeducation to wildlife. The NGO Foundation for the Preservation of Nature and Environment released 84 individuals in another region of Mongolia. Finally, the association Takh created by the Swiss ethologist Claudia Feh, based in the Cevennes, transferred 22 horses, still in Mongolia, in 2004 and 2005.

Difficult integration within the Reservation.

The Przewalski Horses of the Reserve come from the Prague Zoo (3 mares), the Gramat Zoo and the Domaine du Villaret (Lozère) managed by the Takh Association. When they arrived,  November 2005 and again  June 2006, the first two groups of Przewalski Horses appeared lost, unable to find their place in this vast area, which is populated by other animals. Their relationship with other species, especially the European Bison, was abhorrent, permanently conflictual.

For food, the Przewalski Horse grazes the grasslands and vegetation of the Reserve, much less the undergrowth. The trees (Scots pine) and shrubs are consumed only incidentally; in winter this prehistoric horse is able to cope with low food rations. During the breeding season, from April to June, the stallions lose a lot of weight, taken by the group of females they try to keep in the immediate vicinity. Because unlike bison, family groups live all year round under the guidance of a stallion. Births take place 11 months later.

Endangeredseven species of wild horses in the world

There are only seven species of wild horses in the world including Przewalski’s Horse: The Plains Zebra (Equus burchellii), Grevy’s Zebra (Equus grevyi), Mountain Zebra (Equus zebra) and Wild Ass (Equus africanus) are still present in Africa while the Asian wild ass (equus hemonius) and the Kiang (equus kiang) are found in Turkmenistan and Mongolia.

Until 2008, we only recorded one Mongolian horse birth, probably due to the failure of the dominant stallion. It was therefore necessary to introduce new males. We did so in June 2009 thanks to the precious help of the Takh association.

Upon arrival, the six new Przewalski Horses, three males and three females, joined the existing group. After a few difficult days, a group of ten horses was formed including two new stallions and the eight females of the reserve.

Over the years, the constitution and number of family groups vary, increasing the genetic variability of foals.

Since 2014, 3 distinct groups share the territory. The largest (called Big Harem), consisting of about fifteen individuals, occupies a strategic position near the large lake while the small harem (4-5 individuals) remain confined in a poorer wooded meadow west of the Reserve. As for the group of unmarried males, it sails rather in the high parts, attempting regular incursions in the territory of the big harem, inevitably provoking the wrath of the “dominant” stallion.

The Wild Encounters of The Reserve

Births have begun. Don’t miss the moving spectacle of newborns’ antics in the green plains !

From Wednesday to Sunday (Sunday night included), treat yourself to a guided safari or a stay !

Take care of yourself. See you soon