The return of wildlife in France

It was time for France to recover its lost species

Today, twelve centuries after its disappearance from the Mediterranean forests, the largest mammal in Europe is finally back. The European bison are living peacefully again in the plains and forests of Thorenc.

In 2005 and 2006, Alena and Patrice Longour, veterinarian, brought back from Bialowieza Forest (Poland), their last European refuge, two groups of beautiful specimens. Simultaneously, Alena acquired several Przewalski horses from different zoos in Europe and released them on the Reserve. This valiant little horse adorning the walls of many caves of Cro-Magnon Man is the only one to have remained totally wild. Human beings have never managed to tame him!

The Reservation of the Monts d’Azur is the only place in Europe where european bison and
Przewalski horses are living together again.

These two emblematic species that the man had almost exterminated are gathered again in a territory they share with red deer, deer, chamois, wild boars, foxes, wolves, lynx and many other species. Wild and free!

Nobody before us had dared to organize this type of reunion. We did it. This effort  is one of the most exciting ecological experiences of the moment in Europe.

the originsMan and Animal : an alliance forever

We have often been accused of wanting to acclimate to the Reservation,  European bison and Przewalski’s horse, two animals that would have no legitimacy to live in France, and especially in the Alpes-Maritimes. Bison, we are told, is an animal of the great forests of Eastern Europe, while  wild horse is an inhabitant of the steppe. Still others claim that French biodiversity has nothing to gain from these two species.

We kindly and firmly answer those not in agreement are doubly wrong.

One: it is sufficient to consult parietal art to see that  bison and Przewalski horse frequented our regions, not so long ago. If in historical times they have found refuge in extreme environments, it is because they have been forced to do so, in fact, to escape human pressure.

Two: large herbivorous species play a vital role in energizing environments and dramatically increasing their resilience; which is always a good thing for biodiversity.

But let go back  to understand how closely  history of humanity is linked to those of animals, and how dangerous it would be to break this link.

Hunt of subsistence to survive during Ice Age...

Since their appearance on earth, humans have always been scavengers or hunters. At Tautavel, the oldest remains indicate that they hunted  reindeer 550,000 years ago …

Half a million years later, Homo sapiens arrives in Europe during  the ice age. He gradually conquers all of Western Europe. To survive, he must hunt like a Neanderthal with whom he cohabits. Mammoth and woolly rhino, megaceros (big deer), cave bear, panther but also reindeer, elk, wild horse and bison priscus, the ancestor of the current bison, are sought after game. The fauna at this time is therefore very different from the one we know today * ¹.

When the ice age comes to an end, 30,000 years later, large tracts of steppe and tundra give way to huge pine and birch forests. Wildlife undergoes a complete transformation.

Some species disappear forever,  like the mammoth and woolly rhinoceros,  bear and hyena of the caves, megaceros … Others migrate towards the South like the  wild donkey of Europe and panther, or towards the North like reindeer , musk ox, saiga antelope,  polar fox and probably Przewalski’s horse (Equus ferus przewalskii).

Most of them, however, remain on the spot and find the conditions favorable to their spread into present-day Western and Central Europe. Wild boar, deer, elk, deer, ibex, chamois, aurochs then share their territory with a newcomer, the European bison (Bison bonasus), who appeared around 12,000 BC.

Perhaps more cautious than the Neandertal * ², Cro-Magnon appears to have diversified its prey, including small ungulates such as ibex and chamois or small game. He does not neglect, however, large ungulates, and herds of reindeer or wild horses supply large quantities of meat. Neandertal hunting techniques were taken over and the tools improved. Around 10 000 years before J-C, appear in Europe, the first bows and arrows

WHEN THE HUNT PROGRESSIVELY LEAVES THE PLACE TO LIVESTOCK...

Man-Animal comes from the Arctic, where nomadic hunter-gatherers arrive around 12,000 BC to domesticate the wolf which immediately becomes a valuable collaborator of   the hunter in his quest for food. Until the Neolithic (which began around 9,000 in the Middle East), the human populations are essentially nomadic hunter-gatherers. Their survival depends closely on the presence of herds of herbivores. To follow the migrations and to hunt is an obligation. Sedentarization will change this relationship.

10,000 BC, Cro-Magnon found favorable conditions for its prolonged settlement around the Nile Delta and the great rivers of Mesopotamia.

Under this human pressure, wildlife has no alternative but to
sinking deeper into the remaining forests or fleeing

Clearings enlarge by burning and uprooting. The edges are grazed by the newly domesticated species. Under this pressure, wildlife has no alternative but to sink deeper into the remaining forests or to flee imperceptibly to the north of the continent, where human beings are still rare.

WHEN FARMING CONDUCTS TO THE DISAPPEARANCE OF WILD ONGULATE

Only  the wild donkey (Equus hydruntinus) has regressed significantly, its range being limited to southern Europe and the  Middle East.

Two thousand years later, the natural landscape is even more deeply shaken. Intensification of agriculture and animal husbandry has contributed since Antiquity (-2000 BC) to the fragmentation of the huge primival forests that had emerged after the ice age. Massive clearings continue until the end of the Middle Ages (1500 after J-C).

At the end of the 9th century,  French primival forest still resists in the Ardennes and the Vosges, sheltering the last bison and aurochs.

Beginning of the 17th century, European primival forest persisted significantly only in Poland and Belorussia. The Bialowieza forest still covers 2,500 to 3,000 km². It will be the ultimate European refuge for large herbivores: tarpan, bison, aurochs and elk.

In the end,  large fauna paid, in Europe, a heavy price owing to the development of  agriculture and livestock. Unlike the African continent, large species are considered very early as something  to eliminate.

Three main species disappear definitively:  wild ass in the fifteenth century in Spain, auroch in the seventeenth century and Tarpan in the eighteenth century  in Poland. Three others are close to extinction: European bison, Przewalski’s horse and the brown bear. They are represented by only a few relict populations, most often scattered in sparsely populated areas. 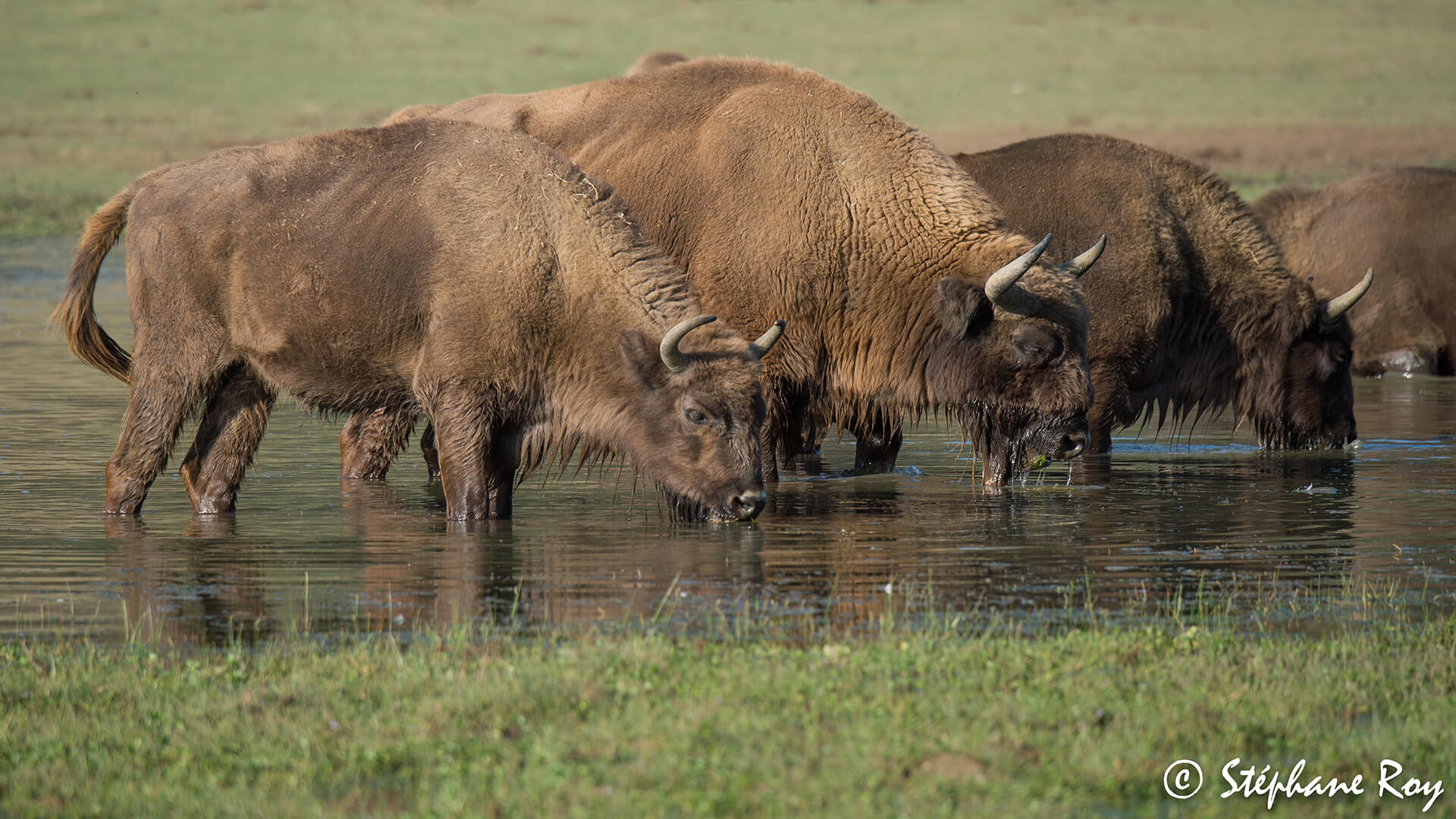 Europe has definitively lost three of its five major ungulate species:  aurochs, tarpan and wild donkey, while bison have only a very restricted range (Poland, Belarus and possibly Caucasus). Only elk can still cover vast lands in Scandinavia and Russia.

For smaller species, red deer, chamois, deer, ibex and even wild boar, the situation was hardly better in France before 1950.

… TO THE RETURN OF SMALL UNGULATE

Since then,  agricultural abandonment has favored the extension of  forest and the return of these herbivores and their predators, especially in the mountain ranges.

According to the National Office of Hunting and Wildlife, 70,000 chamois, 30,000 isards and 8,000 ibex populate the mountain parks and 150,000 deer, the entire forest of the country, with also great regional disparities.

If we must rejoice at this rise in numbers, the fact remains that our country has a natural area capable of supporting a population of deer probably greater than one million. (La lettre de Forêts sauvages – G. Cochet – Octobre 2008).

As for the chamois, ibex and mouflon populations, they could easily be doubled in national parks if they did not suffer unfair competition from domestic herds.

Wildlife remains a forgotten resource by the authorities, in France as in most European countries. There is no major project to integrate it into territorial planning schemes. Its legal status is uncertain and its “management” ensured by a set of actors with contradictory interests: hunters, farmers, foresters or ecologists. Wildlife is nevertheless a major and indispensable player in the dynamics of natural areas.